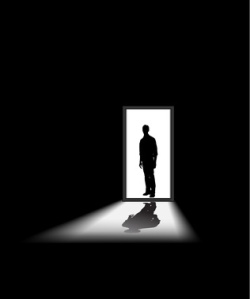 They all started out as a baby.
All 4 of him…
The Boy, The Twins…and the Aged
The baby was beautiful.
His eyes were blue ink… like sky ink
His hair, was white as purity
His skin…soft as creek water
He had even won a beautiful baby contest…in a red-striped penguin suit for hells’ sake!
But inevitably…his cells changed…divided…died, and became new…
Became The Boy.

The Boy stood in the yard
His bare toes in a mix of grass and clay
He was watching a plane fly over…it was a big plane.
The plane was shiny…he had never seen one that big and shiny fly over before.
He was looking for the screwdriver.
The Boy had pounded it into the ground after his father had thrown it at him.
It was no longer a weapon.
But his father had called him stupid…again…and again.
And his father had hit him. A lot
The gravel crunching behind him made him turn around. He knew this…because he had stopped breathing. And when you stop breathing, you can always hear danger better.
His hands became fists in his pockets…blood in his palms.
The chill…like cool water that becomes fire…ran down the back of his neck
It was the Neighbor Boy…the bad Boy
The Neighbor Boy was pain…
The Neighbor Boy drug fear with him like a shadow… a heavy, dead shadow.
The shadow seemed to drag its claws through the gravel, trying to escape fromThe Neighbor Boy.
The big Neighbor Boy smiled…the sun at his back.
There were 2 shadows now.
One fell on the boy…and it was cold.
In the Sun…it was chill.
The Boy closed his eyes…and stepped into himself.

He stepped into a Dim place.
The Dim place…behind his eyes
The 4 of them stood there…in the veil.
The Boy…
The Twins, Left and Right…and the Aged
The door was there before them…
It was a door that was built to keep things in…to never let things out
The light that wept around the edges…bled from under the door…was black light….
So black…beyond black.
The dark light lay on the floor…like it was sleeping.
Nestling, waiting against the Red Line.
The Boy had his ear to the door…his knees in the dark light. His face was planted against its wet, cold surface.
Wet from tears…the stinking sweat of fear.
“I can hear them” the Boy said
His old hands drug across his brow…The Aged whispered…”They’re still there”
Right was uneasy…
Left glanced toward his Twin…“He’s always at that damn door listening or f’n with it somehow”
Right sighed, admonishing his Twin, “Leave him be”!
“I can hear them” the Boy said again, moving his hands over the door…feeling the one’s behind the door.
Grazing his eyes across the Red Line, Right whispered to The Boy tenderly…“Move back…Don’t aggravate ‘em”
“They’re only monsters” the Boy teased, dragging his bare toes across the Red Line…
He stepped back from the door slowly…tied to it somehow.
Left barked…”Only monsters? You brought ‘em…”only monsters he says” he said, giggling to the Aged
The Aged turned to Left and said sternly, “Leave him be”
Right Twin, his eyes on the Boy, said to The Aged…“We gotta do something with ‘em, it’s not good they’re here”
Left popped out a quick laugh…”Like what, what can we do?!”
Aged was quiet…his face was hid in the dim light…a touch of irony bracing his eyes
He knew the monsters were there…Behind that door.
Ever since the Neighbor Boy had come…dragging his shadow…they had been there.
Ever since the Boy found out he was stupid…and quick…they had been there.

The young girl came from the dim carrying a box…she passed through the 4 of them without a word or a glance.

She knelt at the Red Line…placing the box into the dark light. The 4…silent now…watching the girl.
The box faded away from the Dim.
“Sin” the girl whispered still kneeling…staring at, but…not seeing her stained empty hands. It was feeding time.

They seemed to be hungry…all the time.

The Aged stepped up beside the girl, placing his old hand on her thin shoulder…her hand crept up to embrace his. A tear slid from the Aged’ eye.
Left Twin was chewing his lip…he didn’t understand all this bullshit…”Why do you keep feeding ‘em that shit” He was looking at his Twin now, “You can’t keep feeding ‘em”
“I don’t know what else to do” the girl said, quietly placing her hands into her lap.
Right Twin knelt next to the girl. …Wrapping the small fingers in his big hands, he pulled her hands from her lap.
Following his hands with her eyes, she never moved her gaze. Right held them close to his face and shuttered, “I’m sorry it’s all come to this, So sorry after all this time that we have to even be here” His eyes had grown hard while saying this, he WAS sorry. He was staring at the door now.
Right looked at The Boy. The Boy was sitting in a corner of the Dim. His knees pulled to his chest…his face resting on his knee…his face turned away from them. He could feel Right’s eyes on him.
They all knew that about each other.
“It’s not my fault they’re here” he said, still not looking at them, “I didn’t mean for it…” he broke off his reply.
Left said mockingly…”Bullshit”…mostly to himself, but they had heard it…in their minds.
They always knew what each other thought…like they were connected somehow…
In the Dim.
To be continued…
It’s too dark in here right now.
Too dark to see the door.

2 thoughts on “The Key…Part One”