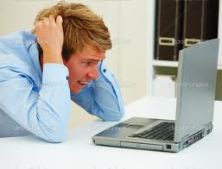 His partner had warned him that this Project could be unpredictable…costly…and demanding.

So he couldn’t very well complain to her. She would just shrug at him if he even attempted to make changes to this Project that he felt…suited the partnership…. She was completely unreasonable…a ball-buster.

He reminded her that they had senior partners that were extremely interested in this venture…years of patient, financial and moral support.

They couldn’t drop the ball on this!

The hours…days…weeks…months he had to wine and dine his partner and the seniors were not a drain on the partnership expense account that this was. He never, ever expected this.

And now…it was broken. The Project was faulty. The budget was shattered. He knew it.

Tom stood there looking at the Project. His brows furrowed into a solid line. His nose itched.

It looked fine on the outside. He had examined it thoroughly. He had even called in his partner…the seniors…and other parties that had interests in the Project. They all had advice and valuable input on the proper maintenance of the Project, but none contributed ANYTHING to this new problem.

It was leaking. It was slinging grease. It was making noises!

What in the hell went wrong?

Tom couldn’t dwell on that now. He was the guy people came too. He fixed problems.

He sucked in his breath and focused. “Come on man, you got this” he whispered to himself bravely.

The Project was still leaking. It was making more noise now.

He had all the paperwork in his hand that was required to repair the problems. The paperwork had come from the top with a terse command…”Just do it”

He bent down over the Project examining it carefully. He could see where it was leaking. He also found the crack where the grease was coming from and groaned out load.

There was something broken on the inside Dammit! That was the only way so much grease would be thrown out.

But…evidently the Project had been constructed above board. It was leaking…it was still working, but lord what a racket!!

This was his first…REAL…exposure to the problems he faced with the new Project. He felt sick to his stomach. So much pressure…so many expectations.

Not thinking, he absently ran his fingers over the fine lines of the Project. He could feel it kicking against his hand.

He stopped…”What the…?” He looked at his fingers. They were covered in the thick grease and moisture that were leaking from the Project. He grimaced…almost threw up in his mouth…”Jeez…” he coughed.

He looked around quickly, throwing the paperwork toward the leaks and crack of the Project.
“Honey…where’s the baby wipes!?” He screamed.

The Project kicked and cooed.