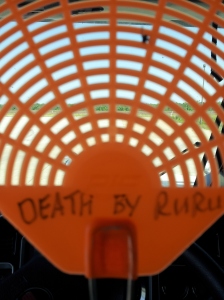 This is a play by play account of the last 10 minutes:

[Setting] The “Writing Nook” of my truck.

I’m sitting here in a tightly sealed truck, driving across the high Nevada plains at 68 mph. Both windows are up, all vents shut, a/c making my eyes water and toes go numb. I’m also listening to The Game of Thrones with my Audible app. I have Bluetooth in my truck too. It makes long miles interesting.

I’m driving past Battle Mountain, Nevada (elevation about 6000’) heading east. I am on my way to Brattleboro, Vermont (Elevation…dick!) It is sunny on the road today…raining in spots. That’s how the high plains are. Wait 5 minutes…weather changes.

It’s so pretty with the sun beams poking thru the clouds and coloring the mountains and plains with shadow and light. It’s rather cool outside too. Temp gauge says 68 degrees. So I decided to roll my window down half-way. If you open a semi truck window all the way it creates a vortex and all the wind is sucked out of your lungs…all your IMPORTANT papers blow out the window, and you become fat….Well, that last part is a slight exaggeration.

I’m just sitting here listening to my audio book and getting pissed about Eduard Stark being beheaded by that prick Prince Geoffrey, when I glance out the window (like we all do) and see a fly. There is a fly flying ALONG SIDE of my truck…I shit you not. You heard me. A fly…? Flying next to my truck…? At 68 mph…? With the vortex and everything else?! This sucker is flying his ass off. I’m looking at this fly wondering if I’m hallucinating, when the sum bitch makes a right turn and flies into the cab of my truck!

I hurry and roll up my window in case a wingman of his I didn’t see is tailing him. I try to follow his flight path around the inside of my cab (you know how we all watch flies) trying to predict where they will land. It’s useless though because it defies known physics and the law of probability.

I do have a fly-flap (I call him RuRu…I don’t know why…) RuRu stays in my truck because I haul a lot of foods from produce markets, and meat packing plants. I also spend the nights in truck stops where nasty truckers will get out of their truck and piss on the ground. Flies love piss! Disgusting. Wait until you see a trucker parked on an off ramp crapping in a bag and throwing it out their window. Nasty Bastards!!

The fly that has entered my truck has now done what flies do…
He has turned into 3 flies. I don’t know how they do this, but we’ve all seen it happen.
I am marveling at this as I reach for RuRu. As soon as I pull him out…they disappear.
You know how them rat bastards are.

You won’t see them for 10 minutes. But…you’ll know they’re there. It will drive you NUTS thinking about it as if though the rat bastard assholes were still buzzing around your head!

Don’t you hate it when they land on the bottom side of your arm? Sunza bitches…

They have more lives than a freaking cat! I mean…work with me on this. Have you ever hit a fly with a fly-flap when it’s landed on your leg or arm? It hurts like hell don’t it? And you know what? You know you hit the bastard…but he flies off. He’s probably laughing too! Sunza bitches…

So here I am…driving an 80,000 lb vehicle with one hand on the wheel, the other with a fly- flap. One eye on the road, one eye for the fly. Not really, I’m looking for these Sunza bitches…with both eyes, the hell with traffic!! And of course, they’re nowhere to be seen. But I am smarter than a fly. I know that when they see me put down RuRu…they’ll attack.

I catch one napping and quickly dispatch him. Now…I have a window to clean.
I see the second fly dive into my trash can and I jam RuRu into the can whipping it around like I’m churning butter! (Now remember…I am still driving during all this) He doesn’t come out. I wait for 30 seconds then churn again. No fly. I’m ahead of the game!

I can’t see the other one. I know he’s there…watching me. I call upon my superior intellect and cunning to anticipate his next move. I put down the flap, and start whistling. I have turned off the audio book so I can concentrate.
I hear nothing…see nothing for 123 miles!

I have parked at a truck stop in Wendover, Nevada for the night. I pull out my lap top to check emails and CSB. I’m trying to think of a subject for a future post when the Sunza bitching fly re-appears and lands on the bottom side of my arm from behind. God I hate that!!
Sneaky Bastard.

I turn on every light that is in the cab of my truck. It’s later and the light is dim outside. 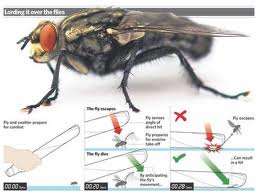 You must see to kill…

[This next line is written 15 minutes from last line.]

I am still waiting and watching. I know he’s still in here. But, there are 2 again. I think the one in the trash can is back.
Sunza bitches…

13 thoughts on “Death By RuRu Reincarnation”