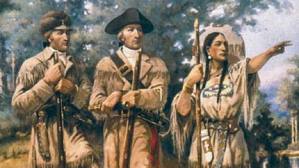 So….
Lewis and Clark stood on a plateau that over-looked the open plains. The valley was immense. The 2 trail-blazers that had been commissioned by President Jefferson to undergo this expedition could not have envisioned the grandeur of this wild country even if it had come to them in a dream.

The 2 men had been on their quest for almost a year now, with several successes and tragedies. That was to be expected, Lewis thought to himself. An untamed country was just that…untamed. Like a young stallion to be broken, it could still kill, if you underestimated its desire to stay wild.

Their fellow travelers had been setting up camp on the plateau for over 2 hours. It was a beautiful day, not a cloud in the sky. Lewis was not concerned about a storm popping up so much as worrying about renegade tribes appearing. It was very windy. Clark had sent the French trapper Charbonneau across the valley to try and meet with Charbonneau’s wife’s people and parlay for supplies and guides. Charbonneau’s wife’s name was Sacagawea or “Cutie” for short. Her tribe was expecting to be contacted on the return route of the expedition, to trade and guide the troupe back to the Arkansas River Delta region that fed into the great Missouri River tributaries.

The Lakota guides had almost given up trying to use smoke signals to alert their tribesman of their location. “What’s the problem?” asked Lewis, looking over at Cutie. “Wind much too big” returned Cutie. The trapper’s wife and Lakota woman was a priceless addition to the expedition…Clark had come to rely on her, but Lewis was indifferent, calling her a “Squar”. “Pompous ass” thought Clark.

The guides and Cutie had noticed that the smoke signals from their kinsmen across the valley were dissipating in the wind, and the drums reverberating over the slow rolling grasslands were being lost in the numerous valleys and flats. “Frustrating” thought Lewis. “What are the drums saying?” asked Lewis growing more impatient, taking his eye from the spyglass he was using to try and read what broken signals he could. It would be dark soon and they had to get an idea of how far they would have to travel on the morrow.

Cutie replied “They have stopped now”. She pointed her hand over the valley and waved it in a sweeping motion over the plains, she said “They cannot see our smoke no hear drums…must move”.

The time it took for Charbonneau to move the others into a better position, the wind picked up making it impossible to control any type of smoke pattern. “Damn” thought Lewis. He looked at Clark, a questioning look. Clark knew what he was thinking. Clark said “This needs to be done by tonight”, he returned his cupped hands to his ears. He couldn’t translate the sounds, but he could tell if they started up again. The expedition depended on Cutie for translations.

Over the next 2 hrs the drums could be heard, then fade. The sounds came in bits and pieces…never long enough to make out a complete message though. The Lakota guides were getting anxious and Lewis could tell that Cutie was becoming frustrated. “Pray” whispered Clark. “Let’s get a little higher up on this hill and try again” ordered Lewis, moving up a slight rise on the plateau.

Lewis and Clark stood on the rise, both their hands cupped over their ears. Cutie stood just in front of them, listening…her eyes fixed.
The drums were finally clear and steady for about a minute, and then stopped. Then, the drums repeated the same sequence of beats again. Cutie looked satisfied that she had understood the message.

“Well?” asked Lewis. “What did they say Squar?” Clark looked at Lewis with a sharp glance. Lewis changed tact. “…Cutie…” he started over again “What are the drums saying please?”
Cutie looked over her shoulder at the 2 travelers and said “The ‘Kota had to move several times, and Charbonneau my husband has found a good spot now. Drums be clear” She turned away…still listening.
“Well?”…it was Clark’s turn to be impatient this time. He fixed Cutie with a questioning eye.

“They say…Can you hear me now?”

One thought on “There Be Drums”