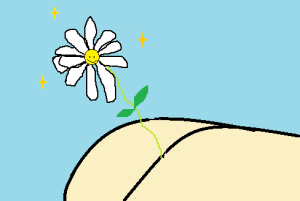 I woke up this morning and there was a Daisy growing out of my butt.

I lay there on my belly and looked over my shoulder at my derriere and seen the flower gently swaying with each breath I took.

I turned my head and put my face back into my pillow thinking “Hmmm, that’s new…It’s usually a rainbow on Fridays”

You know, sometimes this whole thing about me being TOTALLY FREAKING AWESOME can be a pain in the ass. No pun intended.

Just once…I’d like to wake up like normal peasants and just be…I don’t know…like one of you perhaps?

Oh well…it’ll never happen. It’s a cross that I must bear. (I stole that from Jesus…don’t worry, he gets his royalties)

I didn’t ask to be this awesome. I was born like this. I didn’t pray that I’d be awesome. I didn’t walk over to God in heaven and bump him with my elbow and say “Hey…? Gotta second?”

I am not a God by any means. I’m more like a TOWERING INFERNO OF AWESOMENESS!!!

A light upon a hill…

When my clothes all got finished fighting over who would spend the day making me more handsome than ever (they are so selfless) I decided to go into the truck stop and get some Mickey Dee’s.

I stepped from my Chariot of Cargo and placed my feet upon Mother Earth.

She shuddered…then, a slight groan.

I knelt down and stroked her. She shuddered again. Using my best “come hither” voice, I whispered to her “It’s okay…I’m here now”, Mother Earth moaned deep from her core.

What a hoochie mama, I thought to myself.

I stood up and stretched, then looked at my watch.

Just as I started to get pissed and look at my watch again the sky opened. The sun’s rays bathing me in glorious light. Butterflies of all colors and shapes began to dance around my head and set upon my shoulders and head. I lightly brushed the ones from my head admonishing them “Not the hair”

Just to remind them that I am who I am, I plucked one from my shoulder and popped it into my mouth.

The butterfly I was beginning to chew began to weep. “Thank you, thank you” it said.

I looked into the sky and saw numerous concourses of angels. They began to sing and dance about. It was beautiful to see really, but…
“You’re late” I told them, a touch of disappointment in my voice.

The harps died. The dancing stopped.

I laid on the guilt trip. “I get up every day to walk upon this earth spreading awesomeness and laughter…” They were hanging their haloed heads now, some kicked at a cloud with the toes of their sandaled feet.

“I expect y’all to be on top of your game as soon as I wake up…” I scolded them with my eyes. I saw one angel falling from heaven.

Looking at my fingernails, I changed my voice into a seemingly bored tone “Don’t let this happen again…I’ll expect better tomorrow”

Thunder rumbled across the sky. They were gone.

I sensed someone standing next to me. Looking to my right, I saw that it was Jesus.

“A little bit hard on them wasn’t you?” he said, not looking at me.

I replied “Well, if they make it a habit of being undependable, it’ll spread to other things. Peasants won’t count on them anymore”

He looked down at the holes in his hands. He said “Watch this…” he raised his hand up above his head, the sun shining thru the hole like a laser. He moved his hand around to focus the beam. I followed the stream of light with my eyes. He was burning up a line of ants.

I pulled his arm down. “Don’t be frying ants” I said “What’s wrong with you?” “The Buddhists will flip out!”

He looked at me and said “We didn’t make them…” I grinned and asked “Which ones…the ants or the Buddhists?”

I said “I’m gonna go get some coffee, wanna come?”

Jesus looked at me; he looked toward the truck stop, then back at me…

“I’ll race ya” he said, and then he pushes me and begins to run!

I was waiting for him as he got to the stores entrance. He was panting. He bent over, his hands on his knees.

“You’re pretty fast for a hippie” I laughed

Jesus looked at me and winked. He said “I let you win.”

12 thoughts on “Another Day In Paradise”