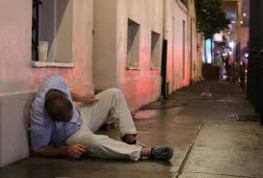 The man in the dumpster looked out from beneath a strip of yellow insulation that he had dragged in with him the night before.

Obviously it had snowed last night because some of the icy flakes slipped from the insulation and fell into his eyes and matted hair, waking him up a little quicker but not affecting the fog in his brain.

He wiped his dirty hand across his mouth and made a tongue flicking “Yuck”. His mouth tasted like a cat had climbed into the dumpster with him and shit in his mouth while he was passed out.

The man stood shakily, jostling around on his unsteady feet, holding onto the rim of the bin, trying not to slip and slide on the snow and discarded Subway sandwiches and pizza that were scattered around his feet.

Little piles of squashed bags of restaurant food had been his mattress.

He didn’t remember climbing into the dumpster. He didn’t even know how or when he had left the bar.

The man reached around with his right hand in a quick move, panic flashing thru his milky brain.

Shwwwee! Thank God!  He still had his wallet!

“Now for the real test” he mumbled to himself, the cat shit making his lips stick together, snow in one of his eyes made him close it as he slowly pulled open his wallet. He squinted into the wallet and was relieved, and a little surprised, when he saw that he still had money left over.

He was proud of himself.

Usually when he woke up after a binge, he was broke, or didn’t even have a wallet.

He had assumed that when he found himself in the dumpster behind the 2 restaurants that he had spent all of his money.

This is where he always came when he was on this side of town after the bar time.

He could always find plenty to eat in the dumpsters behind the Subway and Pizza Hut.

A place to sleep….

So he was proud of himself for this small victory.

He was getting his act together…..He had money left.

That showed some control he thought to himself….

“I gotta quit drinking so fucking much” his mind scolded him.

The man was now sitting on a bus bench, picking pieces of insulation off his shirt sleeve and wiping pizza sauce of his socks and shoes.

A woman sitting beside him told him that he had insulation in his hair. He thanked her, and tried to brush it out, but couldn’t. His hands were starting to shake.

The nice lady asked “Do you mind” and without waiting for an answer she made two quick snatches and removed the yellow fuzzys.

“Thanks” said the man, giving her a short smile, avoiding her searching green eyes.

The thought also flashed thru his mind, with a little annoyance, that at that second, that he had rode the bus here, and he had sat there in his seat, oblivious that he looked and smelled like hell.

And no one had looked at him or said a thing….

“Thanks” he said again distractedly. He had spotted the owner of the bar out of the corner of his red rimmed eyes parking beside the tavern.

“Rough night?” the ladies voice asked thru the haze.

“Bachelor party” he lied, not looking at her, watching the owner unlock the steel grate in front of the tavern doors.

That was his best come back answer for people that saw him crawl from a dumpster and was wondering why in the hell he was in the trash can.

He couldn’t use ‘Frat Party’ as an excuse anymore.

He was too old and….worn looking to pass as a student, although that excuse had worked for a long time and usually got chuckles from inquiring individuals.

Have I been drinking that long?    Hmmm….

She made a doubtful grunt as the bus hissed to a stop in front of them. The lady got on the bus with her bags, tossing a quick look and smile over her shoulder at him.

“Have a good day’” she said as the doors closed behind her.

“You too” he said as the bus pulled away, tossing up a feeble wave.

The man stood up from the bench and wavered…  On shaky legs and frozen feet, he crossed the empty morning street.

The smell of stale beer and pickled eggs hung like a curtain as he passed through the doors.

He loved that smell.

“A little early ain’t ‘cha” asked the owner from behind the bar, struggling to roll a keg into place.

“Need a hand with that?” asked the trash man, hoping that he didn’t.

“No” the keg slammed down, the owner using his knees to press it into its cradle. “I got it”

The man sat down at the bar and before he even pulled his wet wallet out the owner had a tall frosty glass of draft beer in front of him.

“Thanks” said the dumpster diver as he slid the glass across the bar up to his lips and took a long drink….downing half of it in one gulp.

The owner knew what kind of beer he liked…..

The owner was filling another glass as the man finished his first beer quickly. That was the best way to stop his hands from shaking and to clear his muddled brain.

A little hair of the dog that bit you they say.

“Why granny, what big teeth you have…..”

“The better to eat you with my dear….” said the monkey on his back.

“You want me to start you a tab?” asked the owner who was now called Tim.

“A tab? I don’t do tabs” said the shaking man with fiberglass in his hair.

“You did last night” laughed Tim.

“What?” asked the puzzled drunk

“You told me last night that you wanted a tab and for me to cut you off when it got to $100” he giggled now, his pink bald head changing hues as the juke box and dance stage lights flickered on.

“Good” said the man, thinking that this was a definite sign that he could control his shit.

“Yeah” he said as he leafed through his wallet fixedly. He looked up at owner Tim and said”Stop me at $100 again if you don’t mind”.

Tim replied with a grin “No problem, but if you don’t mind stay over here by the bar and don’t get around the girls….you made them nervous last night.”

The man was taken aback”What!? What do you mean I make them nervous” His face paled

“Well” said Tim, a note of embarrassment in the word. “That’s why I had to ask you to leave last night, because of what you said to one of the dancers” He tossed a wet, soapy thumb at the stage.

The drunken man just stared at the owner; he had no f….n idea what this guy was talking about!

Not one damn clue.

But, he knew he must have said something. He never surprised himself in the stupidity that could fall from his face, but he could damn well surprise himself every time he found himself back at a bar….AGAIN

“What’d I say?” he asked, not really wanting to know.

The man shrunk around his glass of beer, staring at the ring of salt on the rim.

“Damn…” he said incredulously, as if though he was finding out that he was the father of Charles Manson.

“You were a little out of it” said Tim, wiping the bar.

The man looked over his shoulder toward the empty stage….

“Geez, What in the hell did I say that for?”

He felt the new found confidence in himself slipping away like beer through his fingers.

The man sat there the rest of the evening, hunched over his beer as if though trying to keep the low light out of it.

“You’re at $100….” Tim told the dark man later as the chairs were being placed on top of the small bar.

The man gave him the rest of his money….got on the bus….passed out….

The driver woke him up when it was time for the bus to go back to the terminal for the night.

The driver had let the guy sleep….

Poor drunk son of a bitch.

“Why do people let themselves get that way?”

He had often thought this to himself when the poor people would stumble on and off of his bus, either on their own power or with a swift kick.

The man fell off the bus into the gutter filled with icy snow melt and salty sand.

The driver thought about helping the poor guy up, but he wanted to get home and open up a cold beer himself and relax. He didn’t want to take a shower until he’d had his beer.

“The whole time he was home, the first thing he would do is *pop* a top!”

He watched as the drunk pulled himself up on a stop sign as if he were trying to drag it down from the sky.

The buses dim interior glow spilled out around the drunks feet in the gutter, a soft gold and pearl blanket of light.

“Why can’t these folks show some will power?” frowning as he pulled the bus from the stop.

The drunken man stood there in the gutter, his hands wrapped around the stop sign, trying to hold on as the world skipped and bucked.

He smelled Pizza Hut before he saw it.

As he sat in a dark, wet corner of the dumpster, with vomit on his feet and pants, waiting on the clean-up crew from The Hut and Subway to bring the scraps for his supper, the man began to cry.

He was crying for the wife he had lost.

He was crying for the children that called someone else ‘Daddy’

He cried for never going back to that AA meeting.

He cried because he was crying.

He narrowed his eyes at a beam that was shining down into the dumpster….a flashlight?

He raised his hand to shield his eyes from the invaders light, the  cone of light spotlighting him in the corner of the bin like a cockroach.

He might have smiled at this analogy if he had been sober.

The Lady from the bus stop looked down into the bin and said something over her shoulder to a tall shadow that had just walked up beside her…The shadow man propped his arms on the edge of the dumpster and looked at the cockroach man….

“That’s him….The guy I told you about this morning” She said quietly.

“Come with us brother” The man said as he held out his hand…….

The cockroach man reached his trembling hand into the bright light and was lifted out.

6 thoughts on “A Place In The Light”