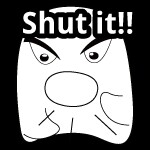 I have turned into an old fuddy duddy.

I arrived at my nieces house yesterday after driving across Wyoming (East to West) at the blazing average speed of 38 mph thru white-out conditions, icy interstate 80, steep grades, 4 wheelers forgetting the laws of physics and stupid ass super truckers.

There isn’t much to look at in Wyoming on this route, during this time of year…….

[Side Note] Is it an evil thing to hope you see a pile of burning twisted metal around the corner, or at the bottom of a hill that resembles the asshole on the cell-phones car that almost ran you off the icy road 5 minutes before?
Wish I may wish I might….I say “Burn in hell!”

When I showed up at my nieces house yesterday morning, the first thing that came out of her kids mouths were …..GUESS……

You probably guessed right…..”Where’s our presents?!” “What’d you bring me!?”

I didn’t bring them a DAMN thing!

I’ll explain in a second….

They were standing around the door as I entered, and as these inquiries were being shouted out I could see over their punk heads the typical destruction of Christmas morning.

The 3 boys went right back to what they had been doing.

I asked their Mom if that was a new game they were playing and she said “No” it was not.

And these guys looked like they had opened the presents, looked at them, watched as Dad put in the batteries or loaded the Nerf bullets, seen the lights flash, threw them on the floor and surrounding furniture, turned on the TV and PlayStation 3 and began playing the same game they have had for the past year.

I know they are just kids…..but I lost my mind…

Here is my abridged tirade:

A) “You buncha ungrateful little shits!”

B) “Do you know how hard your parents work to be able to get you stuff for Xmas!?”

Response from crazed Uncle: “Bullshit, everybody knows there’s no Santa Claus….grow up!”

C) Watch in delight as I shatter their little fantasies!

D) “There are millions of kids on this planet that don’t have parents, homes, food or freaking Christmas presents and here you are bitching
because… (Add whiny voice here and wiggle fingers by face with eyes spinning around while doing a little sissy jig) “I didn’t get a PlayStation
4….!”

E) Watch as their parents mouths drop open and their eyes widen because they are so proud that Uncle Trey has arrived to set the kids straight and say the things that they won’t or dare not say.

I ignore them when they tell me to leave or they’ll call the Police…..

I am immune to pepper-spray too….

F) I tell them how when I was a dirty little butt muncher I had to grow my own Christmas tree!

G) I tell them about the tears I shed when I had to cut it down every year.

H) I tell them how I had to drag it uphill through the blinding snow and grizzly bears….both ways!
Yes….it snows and there are Grizzly Bears in South Georgia….Quit interrupting….

I) I tell them about how I had to hunt for food to put on our table for Xmas morning and how my family didn’t know until I got back from my
stalking if we were having turkey or the neighbor’s dog…..

J) I told them that we were lucky to get two wooden sticks to beat together for Christmas!

I went on and on about how ungrateful and mean they were being to their parents….Waving my arms about, sprinkling ash in my hair and on my countenance, tearing at the sack cloth about my loins and shoulders….!

My pain for the children of the world forgetting what Christmas is really about….What it stands for was terrible!

I checked Wikipedia to be sure I had the definition down right then continued with my harangue.

I fell to my knees, my head hanging low….the sweat from my brow dripping onto old gift wrapping.

The anguish for a lost society heavy in my soul…..

I looked up in amazement when I heard the sweet sound of one of the boys shout out in glee!

I had gotten through to them….I had changed their outlook and perception of Christmas!

“OMG You killed me!” Shouted one brother to the other, their faces locked on the TV while engaging in virtual PS3 mortal combat.

I saw my 4 year old niece sitting in the corner humming to one of her new baby dolls as she dressed it…..

“Okay…Hi Trey” she rolls over and pulls the blanket up….

I got them the same damn things!