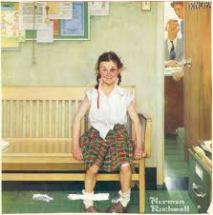 “What do you think should be done?”

That was the obvious question that Mr. Pingree, the principle of Her Lady of the River Cross Elementary School asked Ms Higgins, the matron over the girls.

Ms Higgins, who usually existed in a higher state of perpetual fluster than the typical woman of her years only threw up her hands in abject frustration, a frown of the most dignified comfluxedness that she could muster pulling the corners of her mouth down to the point Mr. Pingree thought her lips might fall off.

Mr. Pingree smiled on the inside…..

“I’m at my wits end” she chirped, swinging her arms widely in a dramatic display of contested submission before dropping them back to clasp together into a tangle of twisting phalangial turmoil.

Mr. Pingree, a jolly, absent-minded man at the best of times was on the downhill slope of 60 years old. He was a stalwart administrator to the under-aged hordes of “ankle-biters” who never outwardly seemed to get bobflostered over most situations that arose within the walls of this fine institution.

He distractedly moved some papers on his desk, from one meaningless pile to another, hoping that Ms Higgins would be watching his hands instead of his face. He forced a look of utter concentration on his face, determined to make each pile of paper the same size and height.

“She just walked up and punched him in the beak, just like ‘pow’!” exclaimed Ms Higgins as she punched  at the air trying to imitate Katy McDonough’s right jab that had ended the life span of Mickey O’Neil’s straight Irish nose.

“What started it I wonder?” asked Mr. Pingree as he added 3 more sheets of papers to the right pile then removing the last one back to the left pile, glancing up only long enough to let Ms Higgins know that he was deeply interested in her narrative and conveying the absolute understanding that justice will be done.

“Well….” Ms Higgins said in a low confidential voice who was now looking over her matronly shoulder, as if though Katy, who was still sitting and waiting outside Mr. Pingree’s office door on the “Bench of Death” a piece of ancient furniture that the students had been calling that hard, cool slab of oak since Jesus was a baby, might over hear

Ms Higgins leaned over the desk in order to impress upon the principle the seriousness of the account.

“It seems that he kissed her” she whispered, distractedly sweeping away a lock of gray hair that had fallen across her matronly forehead and came to rest on her nose like an inverted mustache. The sunlight coming through the windows behind Mr Pingree’s desk flashed across the glasses perched on the tip of the thin nose, her eyes were narrow and bright with the world changing event in question.

Mr. Pingree stopped straightening the edges of the left pile of papers and looked up at Ms Higgins’ flustered face.

Ms Higgins straightened up to her full majestic matronly height, a look of indignation twisting her features as she brought her clasped hands up to her expansive bosom, a dramatic entreaty to the gods to give this poor man understanding.

“He punched her back” said Ms Higgins, a hint of righteousness in her testament to the facts.

Mr Pingree looked up at this.

This was a different kettle of fish all together.

A girl punching a boy in the nose for smooching her without her permission, albeit a boy in the throes of obvious romantic inclinations, was not that big of a deal to Mr Pingree.

But a boy socking a girl in the eye was inexcusable.

In Mr Pingree’s school boys don’t, didn’t, will not or even consider the idea of taking a swipe at the fairer sex.

“Marry him….for real?” asked Mr. Pingree, a look of staged horror on his face. This was getting better by the minute he thought to himself.

“Yes” Ms Higgins answered, her face grave with the audacity of the matrimonial inclined lad, her arms wrapped tightly around her body as if though subconsciously squeezing the boy to a pulp.

“Katy told Mrs. Tinkerwoddle that when he kissed her she poked him in the nose.”

Ms Higgins was looking up at the ceiling with the look of a shaman divining dreams from the sky.

“And….?” Said Mr. Pingree, his interest growing with interest.

“Mr O’Neil then reciprocated with a punch to her eye, according to other children that witnessed….”

Ms Higgins broke off the story here and ensnared the principle with a judicial glare, pushing her indignation into him like butter through a knife, to better imprint the atrocity of the whole sorted affair on him.

She continued “Katy said that after she had poked him in the beak, Mr. O’Neil then said that she shouldn’t hit her husband and preceded to get his point across by giving Katy a big shiner”

Mr. Pingree said “So….” He went back to straightening the right stack of paper then continued, his fingers drumming the center pile of papers as if playing a piano, emphasizing each point of his statement….

“SHE socked HIM because HE kissed HER”

“Yes” answered the matronly matron of the girls.

“HE socked HER because SHE punched HIM…. her husband?”

“Yes” she answered again, her eyes boring into him.

Mr. Pingree put a fist to his mouth and stifled a cough that sounded surprisingly like a laugh.

He composed himself with equal solemnity for the judgment that must fall.

Mr. Pingree coughed again with the laugh sound and asked:

“Do we know how long they’ve been married?”

“So….they’ve been married about….” Mr Pingree counted his fingers …”3 years?”

Mr. Pingree lowered his voice to the best serious tone he could muster with that damned perpetual cough/laugh tickling the back of his throat and said:

“Is there any chance of divorce?” 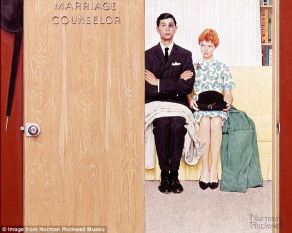 “No” said Ms Higgins, she sounded a little disappointed. Her hands began to fumble with the hem of her apron.

She said “Mr O’Neil says that he forgives her”

Mr. Pingree studied her. She was obviously upset about what she had to say next…and didn’t want to say it.

“Katy told me that he was just a big baby and that she had to put up with it, being married to him for so long and everything.”

Mr. Pingree saw a little wistful smile creep across the matronly face, as if some old memory was shining in her matronly heart.

Her eyes were moist now.

She reached up with a trembling finger and from under her small glasses, wiped a tear away.

“Martha….” He started to say in a comforting tone.

“Katy girl said that….” There were tears freely running down her cheeks now.

Mr Pingree started to rise from his desk and come to her.

She stopped him with a raised hand, her comportment returning to her.

“Katy girl said that they will work it out because that’s what married people do….They work things out”

“Oh to be young and in love” Mr Pingree thought, his stalwart heart swelling for his own dear wife.

He became serious….At least he tried to look serious.

Marriage is very, very, important after all.

He passed judgment and sentence in accordance with the magnitude of the…..dispute.

“Ms O’Neil shall write 100 times….I will not punch my husband” he smiled at his cleverness.

Ms Higgins, with drying tears on her face smiled at Mr. Pingree, nodding her head, accepting this punishment as fair and just.

Katy girl McDonough O’Neil sat on the “Bench of Death” smiling to herself.

She had socked Mikey a smart good one for smooching her in front of God and everybody….

She reached up and rubbed her black eye.