Interesting and ironic note: It’s called “Memorial Day but no one can actually remember or agree when it became observed officially…..

The whip-crack of bullets chase him….

Angry bee’s around his eyes and ears, threatening to sting and kill….

The bombs bursting in air

He pushes his face through the fear churned mud toward the angry sounds of powder and ball….

The earth is rumbling, growling, biting…….chewing.

At the first charge, there is screaming as he and strange men volunteer to die.

There is crazed laughter as he and brother men race to keep their appointment with Mortis.

He sees his new buddies hugging the ground as the world shifts and reels.

The screams that push thru their teeth sound like growling mews….

Mumbled promises for conversion to Christ….

“Forgive me Lord, watch after Mom and Dad and keep my Sis outta trouble”

He sees with pride that his new brothers are still crawling forward through the guts and blood. 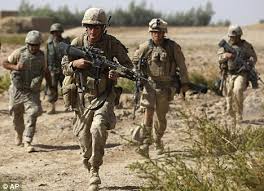 But….they know which way is forward.

They know which way is up.

Never turn back….Don’t get wounded in the ass!

Run toward the killing noise, the Spitter of lead and death.

The private drags his trembling body through a foxhole where 3 GI’s used to have been.

Not enough left though to build a single man….

He tears under and through barbed wire and grins at the tiny pain.

Bullets bounce in the beach like angry little gnomes throwing sand in his eyes as if in jest.

His buddies and he still tug at the earth, moving forward….pulling Death to them.

A gruesome tug of war with losers on both ends….

Closer and closer The Reaper comes, his dark blade striking at their heads

But they’ve been trained well…

”Keep your heads and asses down you buncha wonderful, sorry sunzabitches!!” Sarge screams thru the curtain of terror…

The quiet is gone, only THUMP! BBBAARRRUUMMPPP!

“I’ve got to get up there” is the Kansas privates only thought.

He sneaks a glance over his shoulder and sees his buddies dragging death behind them down the churning beach.

He looks at the surf and sees more “fish” for the barrel…more ‘ducks’ in a row.

“I’ve got to stop that fucking machine gun!”

He WANTS to kill….

Now’s not the time to dwell on it….we’re all sinners here.

Keller’s on one of them boats, his wife with a baby on the way.

Petrovsky is on one of them boats…a newly-wed, owns a pizza joint in someplace called South Philly.

Tex and Bama are on one of them boats, and they owe him money from poker.

“I’ve got to stop it” he says from chewed lips…..not trying to shout down the “Thump Thump Snap crack”

The Private finally reached the lair where the Spitter of death and lead resides.

Only one brave, crazy thought racing through his blonde Kansas head.

The world explodes, the sand painting the sky, fire reaching and tearing at him…..red hot fingers of tumbling pain….

He didn’t know he could fly….

It is quiet now….

Only the footsteps of Death echo across the torn strip of mud, amongst where teenagers lie that would never get to kiss a girl….or even Mom one more time….

The white hot rain has finally stopped on this stretch of chopped, reddened beach.

The snap cracks have died, but took many dreams with them.

Young souls riding on the backs of echoes across bloody sand into the dying horizon.

The suns rays are ropes of life and death, dragging the souls over the edge of the earth where it is dark and sleep lasts forever.

The Kansas private lies in the hot dirt….he looks at the sky, is it his time?

He feels his helmet slide back…blood soaked fingers brush his face…luke-warm water spilling on his lips and brow.

His vision clears and he sees his buddy over him

It’s the medic Corporal Tonoka…from Mississippi, they all him call Redneck Dink.

It takes a melting pot to create great men

Great men that do the bloody work….because sadly, somebody has to.

And they do it…

Great men that hold up their hand and cry…

…..die for their neighbors, baseball, hot dogs, cold beer, picnics and the guy next to him….ankle deep in the blood.

Just remember them and quit wasting them….

2 thoughts on “Remember Us”