Someone got me started on religion and government again, this morning.

Disclaimer:  I hate writing about religion and politics.

But it seems like a person just can’t get away from it, no matter how hard we try. 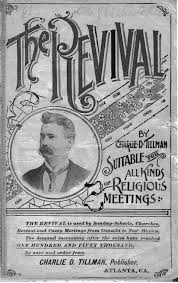 Yes, I believe that participating in your community or church can be a vital and gratifying part of our life.

But I’m not gonna do it anymore.

I grew up in many different religions.

Whatever church revival was popular at the time and the church associated with it, that’s what religion I was until the next hell-fire and damnation sermonizer showed up….usually in a Cadillac.

My Granny drug us around to all of them…vacation bible school, church camp, pot-luck dinners after services….etc.

The highlight during some of these occasions were, for us kids, chasing each other thru the graveyards.

For the grown-ups, it was getting secretly hammered with hidden beer and moonshine disguised as “punch”.

I remember a revival preacher falling down as he threw his horse-shoe…weird, how I remember that now.

They call it fellowship….

Hold on, I’m coming around to my point.

Here’s how it all started this morning:

Pepsi Cola is doing something or other with their labels .

I’m going to look into it a little more.

Not only am I a long-suffering Pepsiholic, but an “American” Pepsiholic, if there is still such a thing…American, I mean.

Here is what I pulled off my Facebook page yesterday morning: 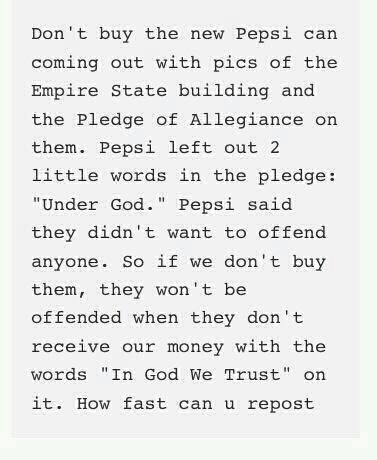 Well, feeling downright insulted and never believing that my beloved PepsiCo would EVER succumb to the will of the masses, I did share it on my timeline.

“Actually, no they’re not. The original didnt have “Under God in it”. Under God is actually a corrupted version that was added later and technically illegal because of the seperation of church and state.”

Jake is not stupid, and he is very intuitive, so, he got me thinking that maybe I’m not as well-informed in some things as I fancy myself to be in my more narcissistic flare-ups…

This is the first thing that struck me;

“How trivial is this? How pathetic we have become to worry about what is on a freaking soda label, that it would scandalize us to the point of anarchy?

Here is my idea of what transpired at Plymouth Rock when the Pilgrims landed:

“Let us give thanks to God that we didn’t die on that freaking boat!”

“Wasn’t our entire country and ideals based on religious freedom first, way before we even had an inkling of becoming a independent nation. The main reason people fled Europe and the UK in the first place was religion, and the practice of their own dictates, right?”

“So, how can they really be separated when one entity was fundamentally and theologically based on the other? It doesn’t matter anymore though, organized religion, atheism, tree-huggers (so to say) and man in general, have interpreted dogma to fit their own agendas.”

“I’m starting to believe that the worse thing God, Jehovah, Yahweh or The Great Spirit ever did was bestow Free Will upon a species that has no self-control, lingering conscience or the ability to comprehend consequences relevant to ANY act of will.”

Actually, we never had a real chance of succeeding.

I believe that the whole human experiment was doomed from the start.

If y’all think about it for a minute, knowing mankind, and what you have seen in your lives, take away hope and all that positive thinking crap, and set it aside….

Is there a way to seperate church and state?

I don’t think so either.

But, I’m an optimist on medication that keeps me from being suicidal, so, my opinion may be…tilted somewhat.

Fill one hand with hope and shit in the other….

See which one fills up first…

I am not religious anymore…

I am a spiritual person.

I don’t go to church because I feel it is more a social event than a worship service….A place to be seen.

Do I believe in God?

He is my God, my own belief.

He is not quite forgiving or tolerant of the mistakes I keep making over and over.

There is only so many times you can go to the well with my God.

My God demands constant vigilance, on my part, to be the best man, the best “person”, I can be.

His dream for me is to live a good life, be kind, charitable to others and understanding that I was never intended to be perfect, that I could NEVER be perfect.

My God tells me to quit beating myself up, and he won’t forgive me of anything until I forgive myself first.

After all, how can he forgive me for something that I keep punishing myself for.

My God doesn’t do forgiveness, now that I think about it.

He does acceptance and understanding.

You see, he knows how I am.

I know how he is and what he expects from me.

I know that my God is much smarter than me, and there is no way I can comprehend the mind of my God.

I don’t know why a soda label got me all fired up this morning and led me to write this post.

Our country (USA) is less than 300 years old, and we believed that we were the “Light shining on a hill”

Our country isn’t even as old as Chinese pottery, the pyramids, arrowheads or “Romeo and Juliet”…and we think that we are the greatest nation on earth…?

….that we got it all figured out?

We are not, who we once were.

How can we be?

When we started ripping down the foundations that this very country, or the rest of the world for that matter, was built on, we became the houses that were built upon sand.

Can the two coexist?

No…too many cooks in the kitchen spoil the stew.

No, not with man controlling them.

I am glad y’all believe how you do.

I’m glad you are concerned for your families and the “direction” our world is taking.

I’m glad you have that freedom.

All people have that freedom, in themselves.

But if their government finds out…..

Matter of fact, according to historical data, scientific certainty and religious beliefs;

We are scheduled for extinction.

So why do we spend our time in trivializing and hypocrisy?

Not to mention, killing people because your God is different than mine, or your skin is a different color.

We don’t stand a chance…

The Bible tells us so….

So does the Quran and Talmud, in their own way, that I admit I am wholly ignorant.

I’ll find out though….

I want to know what makes us tick.

Is God a crutch?

Is Jesus an excuse?

Is forgiveness a blanket clause?

Is our flag waving goodbye?

8 thoughts on “The Bible Tells Me So”