First off, I wanna thank all of y’all that liked and commented on the previous post.

It means a whole bunch!

Check this out, though…..

I was actually laying in my trucks sleeper berth, winding down for the day, and playing with my phones camera; when I happened to notice that one of the pix had a cool light beam and aura in it. And the first thing I thought of (I still don’t know why) was that it resembled the biblical encounter between a heavenly messenger and Saul of Tarsus on the road to Damascus. 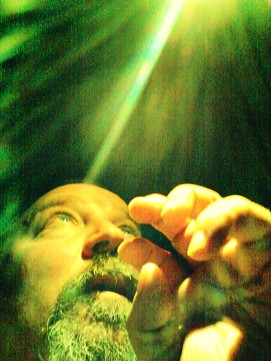 If you don’t remember the conversion of Saul, or you are a heretic, pagan or atheist: look it up, it’s a cool story.

I must have seen something similar in the big picture bible my grandmother had in her house while I was still an ankle-biter.

Did any of y’all have that bible, too?

Y’all know…..the big one with all the classical religious portraits in it…?

Kinda weird where inspiration comes from sometimes, isn’t it?

I typed it ALL on my phone!

I didn’t really expect, nor IMAGINE that that particular post would get such a response!

I liked the pic though; every bit of that post and photo editing was done with a cell phone while lying in a semi-truck in the middle of Illinois….

Amazing…and kinda scary if you think about it.

I got another inspiration this morning after watching a mom feed her baby a French fry.

She held up a fry where the toddler could see it.

It took the kid a second to focus on the fry; after jerking his head back because he thought mommy was trying to jab him in the eye with something…

I shouldn’t have laughed….this was serious business.

The baby stared at me, or my laugh, and blew a water bubble out of his cherubic lips; I blew one back.

Mommy smiled at me and him; then said something to the non-speaking infant, slowly turning his fat face towards her to regain his attention, once more.

After mommy had waited until the kids eyes had focused on the fry again and was sure that she had the baby’s full attention, she slowly lowered the fry; dipping it into the little paper thumbnail that held the ketchup; watching the baby’s eyes the whole time to make sure he was following her movements.

That’s when I realized that I was watching a baby and his first epicurean experience of a French fry and ketchup!

It was like….National Geographic, man!

Mommy raised the french fry slowly to his lips….

He leaned his head forward, like he was gaping for a bottle…

Y’all know how babies look when they make “the feed me face”….

The baby smacked his lips, his eyes wide….then “the num num face!

To wonder, or try to remember; what exactly was racing across that baby’s tongue and blowing his mind when the new tastes of French fries and ketchup hit him full force.

I can only imagine.

And that’s what sux about being a grown up sometimes….

Can you remember your first French fry?

No, alas; we don’t notice simple stuff like that anymore after we grow up….

Our minds and taste buds are tainted from years of abuse and fear.

Abuse: McDonalds, Subway, Taco Bell (which I love) and Denny’s.

Fear: Trying some new dish from a food group that doesn’t look like food, but smells great!

“I ain’t eating that, it smells nasty!”

“Yeah, but it tastes great!”

My top 3 favorite foods, in order: Lobster, a big T-Bone Steak with A-1 sauce and Greek Gyro’s with lots of Tzatziki sauce!

I wonder if my first taste of peach ice cream changed my life.

We don’t wander into the realm of new palatable excursions…

“I’m a steak and potato man, myself!” You may say…

I would like to taste something like a first French fry and ketchup for the first time, again; with no idea what anything else in the world tastes like other than breast milk or baby formula.

Can you imagine that now, no…not the breast part….

Your very first French fry with ketchup; your first slice of lemon or peach ice cream?

The shock to the senses; oh my gosh, my nipples are getting hard thinking about that home-made peach ice cream…..yeah, the kind with little chunks of peaches in it!

The explosion of flavor, the synapses going berserk, the baby brain crying “IIIIII….LIKE IT!!!”

The baby boy licked his lips and watched mommy pop the French fry into her mouth and slowly began to chew the fry, watching her child with the universal “Yuummmm” mommy face….y’all know the one; with wide eyes, nodding head and the chewing bliss smile….

Then, mommy pulls out the masticated fry and starts to feed it to her child.

The baby boy seals his lips and frowns.

Was he disgusted at the fact that his mommy had put cooties on the fry or that she had licked all the ketchup off?

It passed thru my mind that it was a little of both, but I was leaning more to the absence of the ketchup.

I don’t think he has to worry much about cooties though; it’s a scientific fact that cooties can only survive on the female of the species between the first and third grades….

Mommy pushed it against his lips….

He pushed it away with his little tongue…

Mommy tried to shove it past his lips…

He turned his face away….

Dad has been watching this event…

Mommy is a girl.

She does not know the ways of grunting, spitting, scratching prehistoric man stuff.

So, the most awesome Dad in the world grabs some fries from his own tray, smothers them in mommy’s ketchup thingee and plops them down on the baby chair tray in front of the kiddo.

I think I heard daddy make a grunt of support…

I discovered that even though the baby was quick to associate yummy with French fries and ketchup does not necessarily mean that getting the fries and ketchup into a mouth with only two visible teeth is an entirely new kettle of strained carrots….

*shudder* the things they feed these kids…. 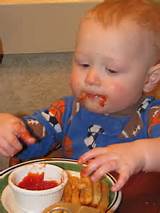 Try as he may, the poor little bugger; he could not, for the life of him, fit those damn fries into his mouth, only smearing ketchup all over his face and in his hair.

Mommy frowned at baby, then at Daddy.

Baby looked at them with brilliant, happy eyes with lots of ketchup on his face and sucking his French fry, because it is hell trying to chew a French fry with two freaking teeth obviously!

Oh, what it would be like to experience our first real flavor again….

I realized once again, that I was seeing something unforgettable.

It may have just been a French fry and ketchup to us….

But, it was his first.

I sit here now, as I write this, thinking….

“I could almost taste it, too”