This is a tweaked oldie post that I once used as a guest blog to serve my own purposes.

Full of shit, you say?

Convinced and sanctified, says I….

Preferably, KC’s Masterpiece…. With a side of Cole slaw.

This Delusional thing is cool…

Take a trip and never leave the farm.

I’m looking thru my old posts and reading  ones that I forgot I even wrote!

Man, hard to believe I used to suck….

Yes, sometimes I am full of myself and think too highly of my abilities.

Then, I reconsider; decide that I’m being too critical of myself which always leads to me covering my breasts with ice cream, waxing my butt like a Chia pet and doing the hokey pokey without my feet.

At one time, I was going to rule the WordPress blogosphere and turn everything on it’s ear.

Then, after I wrote my 2nd post and read others posts, I realized there were lots of very talented people out there writing their hearts out as well.

Too bad they don’t have their own cult, like me….

I love being a legend in my own mind: less crowded.

I don’t really need the reassurances but, I appreciated it, nonetheless.

I like dealing with the common herd; keeps me in touch with the sins of jealousy and envy.

Looks like more women blog and read posts than dudes.

Look, if God had given chicks a pecker like us, which would you rather mess with? A freaking blog?

I’m not bragging or boasting…no more than usual at least but, I’d like to share with you…some of the skills that set me apart from the rest of y’all.

These talents were bestowed upon me by powers greater than you or myself.

Can’t think of one off hand but hey, I’m practicing humility…

Overrated, if you ask me.

I have to give a shout out to a bit of a Valhalla groove and some Mt. Olympus jive, and of course…just plain God-given gifts.

I want to express my utmost sincerity in this endeavor and stress that I never asked for these extraordinary abilities.

I am just a human being that was fortunate enough to have been born into a higher gene pool than most.

As I have said…

I would worship myself against my own will….again….One more time… Forever.

I don’t mind you asking.

I try to make sure the little people of the earth find a reason to go on living and reaching for their dreams.

I love it when people touch me on my special place….

Maybe my light can show them the way to a higher plane of fulfillment and hopefully getting the most out of their low-born status.

I wonder how much money pharmaceutical companies would pay for poor people?

There is a sense of charity, I guess, in sharing my omniscience in most fields of known stuff.

I don’t even try to categorize all of my talents anymore.

There are so many.

For another example: I once opened a jar of pickles without a washcloth….

I don’t even know if I am proficient in a particular field, study or endeavor until a situation arises and I conquer it.

I can’t explain it, it just happens…like popcorn.

1) Albert Einstein – Theory of Relativity
I knew about this way before Einstein. I know I wasn’t born yet, but I was a glint in my dad’s dad’s eye and I was aware even then that when you have NO time, relatives show up.

2) Leonardo DaVinci – Mona Lisa and other stuff, like that church graffiti he done in Rome, Georgia for example.
I have a big problem with this guy. Everybody’s screaming and hollerin’ about how great the Mona Lisa is. I look at it and think “Hell, at least show her boobs!” Italian chicks have great racks!!

3) Walt Disney – Cartoons
I don’t know how he came up with his ideas but I know that I don’t have to take LSD to see talking mouse’s, ducks, dogs, teapots and mermaids…

Now, back to my humbling god-like abilities:

1) I can forget what I was doing at any given second, much faster than the above average person.

2) I can fall asleep in any position as long as I have my Ambien.

3) I can hallucinate in any position…as long as I have my Ambien.

4) I can make up an excuse so fast, that I believe it before I’m even finished with it.

5) I can eat a whole bag of grapes at Wal-Mart without any one ever seeing me. It only takes about 45 round trips to other aisles to throw off suspicious parties.

6) I can look at a woman and know instantly that she does not find me attractive…or know that I’m following her.

[6 addendum] It seems that I’m also impervious to mace, pepper spray, tazers up to 1 million volts and kicks to the balls from 2″ Pumps, Croc’s…or Ralph Lauren chick combat boots…

7) I can forget what I was doing at any given second, much faster than the above average person. 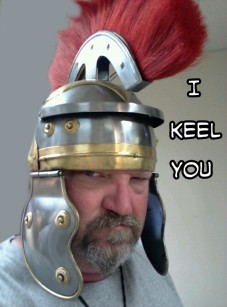 10) I can look in a mirror and know for a fact that…yes, I am better looking than yesterday; some things are fucking obvious okay?

[10 addendum] Do you know what it’s like to never be surprised by your own appearance in a mirror? My mirror says “Mm mm mmm, I’d do you if it wasn’t against the bible”

11) I can look at my naked body in a full length mirror and know for a fact, that there’s someone else in my house and they like to hide my dirty books.

12) I can hold my breath for 20 seconds while I bend over to tie my shoes. I tried to hold it longer but, I passed out……That’s why I told NASA about Velcro after I invented it.

13) I can hold 300 full Wal-Mart shopping bags with 5 fingers, while trying to push the cart into the little cart corral thingee, dodging Chevy’s and cussing into my cell phone because the wife just remembered something she didn’t put on the list.

14) I have better times for sex than professional bull-riders. They’re off in 8 seconds…I’m off in 5. My wife has a short attention span, THANK GOD!

15) I can put off everything that must be done without blinking an eye.

18) I can convince anyone in the world that they are the most important person to me….I can maintain this illusion for almost 5 seconds. (See above sex prowess statement #14)

19) I can harbor ill-will, animosity, anger, murderous thoughts and spite for anyone at any moment, for an indeterminate time that suits my need for vengeance. I was gonna say jealousy or envy, like I said earlier, but when I looked up the words, I realized they’re not in my personal vocabulary. They’re in that Webster Dictionary but, I still don’t get it.

22) I can start out a new post with no idea what it’s gonna be about and still crank one out.

If at first you don’t succeed; blame someone else.

Words to live by….

I am the Alpha Dawg amongst puppies.

I am the roll in the tootsie…

I will call my religion…. ME.

You’re Welcome for my time,