I accept this 30 day Writing Challenge from Klnikolovas’ Blog because I get where Klnikolova is coming from….and it sounds like fun.

Good lord, where do I start, where CAN I start?

From the beginning, from the first time my mother scolded me or praised me?

Do I recall all of the bad things or good things?

Do the bad things leave a bigger mark on my soul than the good things?

I am made of pieces of opinions by flawed, imperfect people

I am a castle built on sand, made from blocks of comments and observations by people that had the responsibility to build me up, tall and impenetrable; people that should have created me as a fortress that was beautiful to look upon and had a light that shone bright as the sun, for all to see…

I should have been a beacon….

But, I believe that I am only a quaint hostel; built to stand in a dark forest that is filled with ghosts, skeletons and shadows.

But, do not weep. The sun does shine through the leaves occasionally and I have a small garden that often blooms beautifully according to the amount of complimentary light that reaches it.

I think it’s the things I can’t remember that define me; that is my bedrock.

The foundation on which I depend upon is not of my own making.

Others have shaped it, I have only built it. 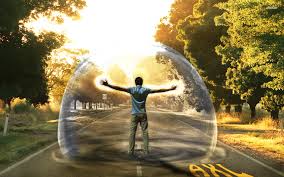 I cannot pin-point one thing, in particular.

I am what they say I am; how can I be different?

A perception as to some; I am created and categorized by what others have told me, in love and anger, by careful consideration, knee-jerk reactions, first impressions and “Hey have you heard so and so and this and that, about him?”

“I’m gonna tell him a thing or two” is quantified according to the conceptions of themselves and also sit upon foundations others have built for them.

“I’m gonna give him a piece of my mind” is a two-edged sword. It’s all in how they swing it….defense or attack.

I am part of a vicious circle that stems from our first parents; the ignorant couple from Eden…..

We….all of us….are affected by those words; words that we have forgotten, but not forgotten…..

They point and say….”He told us”

One man says “You are beautiful, you are smart; you are awesome”

“HE DOES’NT KNOW WHAT HE’S TALKING ABOUT, BELIEVE YOU ME!”

Can you see what I’m saying?

Who would you believe?

We believe haters before we believe lovers.

It is easier to tear down than to build.

Who DO I believe?

Who SHOULD I believe?

A fence in my mind that was built early, high and sharp…..