All of my skin is falling off….

….Or I woke up in a pile of dried onion flakes.

I have noticed a few things here and there as I approach my 50th birthday.

I believe that my skin is like a bunch of rats abandoning a sinking ship.

I have been greasy most of my life, eschewing Oil of Olay, Lubriderm and similar products.

But now, I can use my fingernails to write phone numbers on my forearm.

So I decided to attempt a scientific observation or three this morning.

As the rising sun shines thru my windshield I scratch my arm as if killing an itch.

I see that there is little flying flakes of epidermis floating in the sunrays like dandelion parachutists.

I am not initially alarmed at this because I am aware that all of the skin on your body is dead anyways.

In my case however, I have drawn the conclusion that the state my floating flakes present is that my skin was dead before I ever saw it.

I am a Zombie…

I do not crave the taste of human flesh as yet, but I know that as the world spends out of control, currencies collapse, infrastructures implode and nations war over map lines, I have a distinct advantage over most of my fellow men and women.

I am devious and have a fear of starving to death.

You are as good as seared and spritzed with a light extra virgin olive oil.

A) I will not eat men over 40. They tend to be gamey and I cannot have much fat according to my doctor.

B) I will not eat gay people. They are nothing but sugar and spice and cause tooth decay.

C) I will not eat family members because most of them owe me money. It is truly precious to be in my debt…..They just don’t know how lucky they are.

But if I hit the lottery…..Dead meat.

I will eat my brother first because he is low in fat and big boned. Plus, he is bald so I won’t have to worry about a hair-ball.

I will boil him with potatoes and carrots, some turmeric and allspice and maybe some red pepper hummus to give him some pizzazz.

I think she would starve to death before eating him out of spite….

He is rather ugly now that I think about it.

I should have thrown him in the creek tied up in a burlap sack filled with bricks and baby kittens when we were kids.

I couldn’t do that….I love cats….especially with Szechuan techniques and a nice peanut oil.

I haven’t decided which wine I should serve with my brother. Do you serve chardonnay or a red wine with dumbass?

I will not eat my ex-wife because she is too short…. 😉 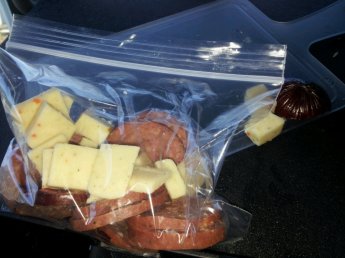 I will eat my children though….But I’ll have to make them last awhile.

They come from good stock and will probably taste like me and I taste great!

Don’t want to be gluttonous however, that’s sinful nature….

Who else shall I eat….Let me think….

I’ll turn my wife into peanut butter because she’s freaking nuts if she thinks I’m gonna get rid of my old t-shirt!

I think I’ll put her on a spit over a flaming pyre. I won’t even garnish her or baste her with anything!

She doesn’t even deserve BBQ sauce thinking I’ll ever get rid of my Ozzy t-shirt. I’ve had it longer than I’ve had her, and I HAVE HAD her many many times!

OMG! I just realized something…

My wife is a slut! (Love ya honey biscuit)

I don’t care if it’s got holes in it and washing no longer takes all of the “me funk” out of it, it’s my dang lucky shirt!

I’m not even gonna serve side dishes with her now that I think about it….

I do not fear rotting away or spending eternity as a Zombie.

First, as I have stated before, I am already rotting away.

There is obviously something dead inside me, or maybe everything is dead.

Whatever it or they are smells like…..Eck!

I can’t even stand myself…..

I shouldn’t smell this bad and still be alive.

If I start smelling like garlic and Vicks vapor rub I’m gonna kill myself!!

Okay, well…..I’m tired of messing with y’all and trying to get a laugh outta you on a Monday morning.

Hell, I don’t even know what day it is….

Alright then, start trying to figure out which people you are going to have to eat when the shit hits the fan.

It’s always better to be loved by thy neighbor….and trusted.

That way when you have to bash ‘em in the head you don’t have to sneak up on them….

13 thoughts on “In Good Taste”